We are the Alexa Prize finalists again 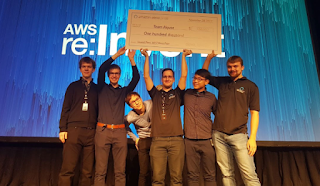 We have made it to the Alexa Prize 2018 finals again with our social bot Alquist. Our competitors are the Alana bot from the Heriot-Watt University, Edinburgh, Scotland and the Gunrock bot from the UC Davis, Davis, CA.

It was almost exactly one year ago I wrote the last blog. That time we were excited to get to the Alexa Prize 2017 finals, and we celebrate today again, we made it to the finals with the Alquist team again. It was a hectic time.

We have completely redesigned our bot. This year when we started the semifinals, we experienced problems with data to train the new AI. As the number of interactions was growing, we were increasing the training sets and improving the accuracy. We have augmented the dialog acts classifier processing every new user utterance. It is using the convolutional neural network and classifies the utterances to around thirty classes. The significant change in the overall architecture is the dialog manager. Last year we used a rule-based approach. It was great for cooperative users, but once the user did something unexpected we had troubles. It was also a very laborious process to write the rules. We ended with hundreds and hundreds of rules. It was also challenging to update or enhance the dialogs.  The latest Alquist uses hybrid dialog management. We have reduced the rule-based decision to a minimum and made the principal part controlled by an LSTM neural network. We have many LSTM models for different sub-dialogs. The sub-dialogs are trained and updated for excerpts of the bot user interactions. The hybrid approach significantly reduced the amount of work necessary to create a new dialogue compared to last year's rule-based approach. This fact allowed us to broaden the range of conversational topics substantially. We have also taken advantage of delexicalizing the utterances to improve the training speed. The bot includes several other neural networks helping to switch between different topics, estimating the sentiment, etc. The whole system is getting quite complicated. We have also spend a lot of efforts on improving the new information acquisition. We are crawling several social media. The discussions are an additional source of interesting facts. The social media are a great complement to knowledge databases with the factoid type of information like for example Wikipedia.

The team has changed a little compared to the last year. Roman has left, and Petr Lorenc has joined. He is helping a lot with the intent, entity recognition, which is an essential part of Alquist and has a significant impact on the overall user experience. Currently, everybody is very busy since we have another at least two months to improve the functionality. We will focus on the user experience. Since English is not our native language, we have to spend a lot of effort ironing out all conversation, adding SSML, etc.  Amazon will offer to the Alexa device owners only three first bots, which means we will get more data. More data gives us a chance to improve further the accuracy.

Amazon will announce the winners as last year at the re:Invent Amazon Conference in Las Vegas. We are looking forward to visiting Las Vegas the heart of gambling, as well as meeting our competitors and helpful Amazon Alexa Prize staff, as well as learning the latest from the Amazon technology. We were second behind the Washington team last year. Guess what are our aspirations this year. If you are a lucky Alexa device owner, try "Alexa let's chat." Keep the fingers crossed!
Posted by Unknown at 10:57 AM